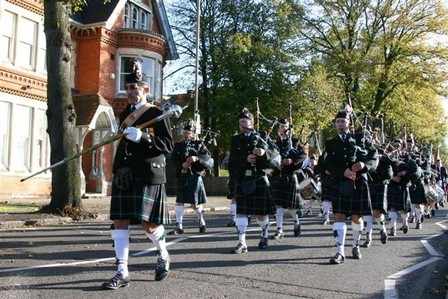 The Seaforth Highlanders Association Pipe Band was officially formed in 1961, making us Leicestershire’s oldest Pipe Band. The Scottish connection with the Midlands mystifies many so a very brief explanation is in order.

The Regiment recruited widely in our county during both world wars. Men who returned to Leicestershire formed a Regimental Association in 1931 and always maintained a group of musicians. In 1961 the current form of band was raised to ’honour the Regiment and to further the pursuit of the highland arts, namely piping, drumming and dancing’.

Sadly in September 2008 the Leicester branch of the Seaforth Highlanders Regimental Association was forced to close after the passing of its stalwart members. However the band was granted permission to keep the name of the Seaforth Highlanders and to carry the branch colours in perpetuity. Our original aims remain broadly unchanged with the addition of a new commitment to maintain Remembrance of the Regiment’s connections to our county and to honour those who fell in conflict. The band’s annual Remembrance ceremony centres on St. Stephens URC in Leicester which houses the Seaforth memorial and rolls of honour.

Despite the Seaforth Highlanders having been thrice amalgamated, in 1961,1994 and then again in 2008 we still retain many traditional elements of Regimental uniform including our Modern Mackenzie kilts and the recurring stags head badge with its Gaelic motto, ”Cuidich’n Righ”, meaning, “Help The King”.

We have performed at a huge variety of events from weddings and funerals to overseas music festivals, military parades and carnivals. The skirl of the pipes, the distinctive call of the drums and the sight of highland dancers leaping over crossed swords make any event memorable as our countless audiences will testify!